On October 16, 2021, the FAZ reports on the urban planning discussions that have arisen around two planned Frankfurt projects. The first is about the Olivetti Towers in Niederrad, the second about the Interconti Hotel in downtown Frankfurt. In both cases, the problem is the same: in the immediate vicinity or even connected to the older building, the vacant spaces are to be filled with new parts of the building.

The criticism is not directed against the basic intention of the property owners, but rather against the available drafts and the so far “intransparent procedures”. The FAZ quotes Torsten Becker, chairman of Frankfurt’s urban planning advisory board, as saying: “A competition would be the right instrument.” Manfred Wenzel (TEK TO NIK Architekten), as a member of the Advisory Council on Monuments and Deputy Chairman of the Urban Planning Advisory Council, expresses the same opinion: “In such a relevant situation in terms of urban planning, you also have to examine variants.”

FAZ author Rainer Schulze draws the right conclusion in his introduction: “The plans for the Olivetti towers and the Intercontinental hotel high-rise raise the question of how the city deals with the heritage of the sixties.” The question should be clarified soon, as it will arise in the future with more and more projects in Frankfurt am Main. 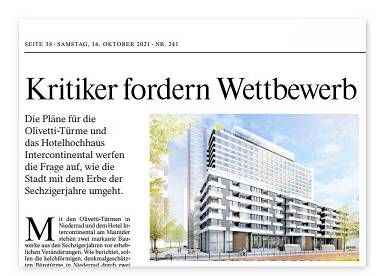