In the June 10, 2021 issue, Rainer Schulze, an expert on Frankfurt architecture and urban development policy, looks on page 31 at the political intention of the new coalition in Frankfurt’s city parliament, which is to promote the city’s sustainability culture: “We want to turn the Frankfurt skyline into a green silhouette.”

As quickly as possible, there should be mandatory specifications for facade greening. Rainer Schulze raises questions about how, for example, the greening of existing high-rise buildings should work and whether the climatic conditions in the Rhine-Main region are favorable enough to allow tower-high facades to be greened without any problems.

He mentions existing projects such as the 100-meter-high “Eden Tower” currently under construction and also asks some well-known Frankfurt architects about the topic. Manfred Wenzel of TEK TO NIK Architekten also has his say, who is one of the cautioners and worries that corresponding regulations could be very inefficient and that in most cases the high expense would be better spent on measures that would deliver a better overall balance:

“Manfred Wenzel considers the greening of high-rise buildings to be ‘bought at a high price’: it is far easier, he says, to green streetscapes and lift resources there. ‘Facade greening is a complementary symbol, not a real contribution against heating,’ …”

Tip: If you want to read more about the plans of the new coalition, you can find an interesting article in the IZ Immobilien-Zeitung. 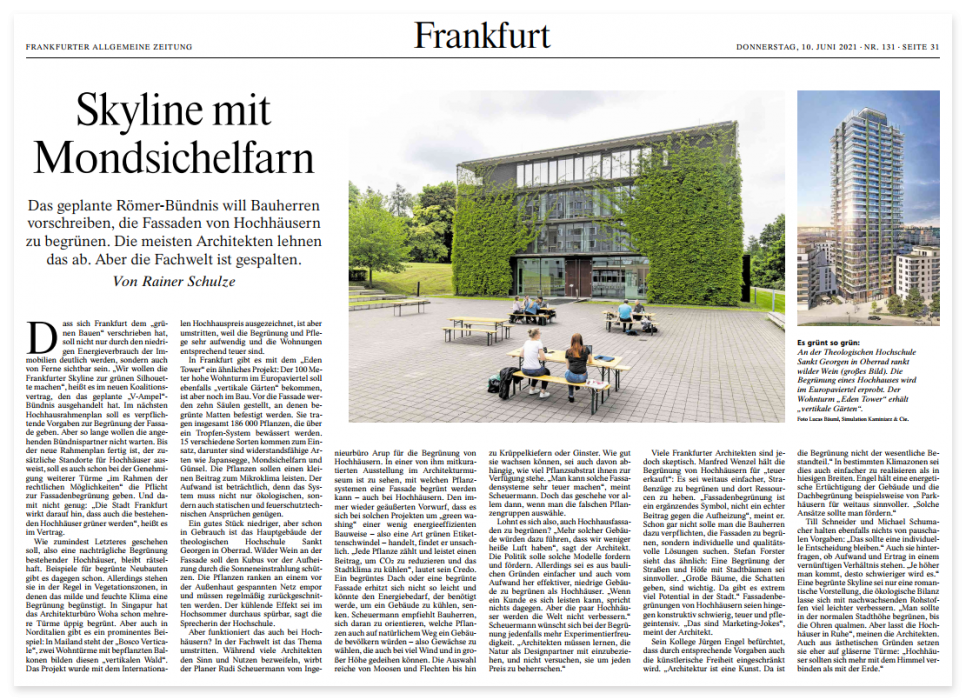